I bailed out of my hostel and caught a bus to Florence, arriving at 3 PM. I’d overbooked myself. My plane leaves on the morning of the 8th, which gives me about a day to see all of Florence. This is the opposite of Sage Herbie’s advice, but it’s too late. I’ve buttered my bread. My stale, beef-jerky-chewy, terrible Italian bread.

I crash land in Florence and sprint of Florence Plus, which turned out to be less of a hostel and more of a low-budget indoor resort. I booked it because of the laundry facilities, but there’s a bar and a dance floor in the basement, there’s a terrace that I never got to see because of all the rain, there’s a Turkish bath and a “gym” which consisted of 2 ellipticals, but still. In the laundry room, I met a chef from New York on a similar trajectory as myself, and we grabbed a quick lunch of Florence’s world famous Thai food. We spent the meal bitching about how college is a hustle, but a far more successful hustle than all the unsuccessful hustlers we’d deflected in Europe.

We parted ways and I did a lap of Firenza. It’s a very small city, and all the sights to see are within a mile of each other. First stop was the Santa Maria del Fiori cathedral, which offered a whole host of Catholic-thematic sights for a mere $20 admission, such as “the tomb of some popes” and “weird old paintings that didn’t make it into any museums”. The duomo itself is, unsurprisingly, the crown jewel of the church everybody refers to as “the duomo”, but you needed to reserve a place at least a day in advance because this economy ain’t gonna support itself. I opted to ooh and aah at the cathedral interior, then book it to my next highlight. I would have mooned over the exterior too, but most of Europe seems to be undergoing maintenance. 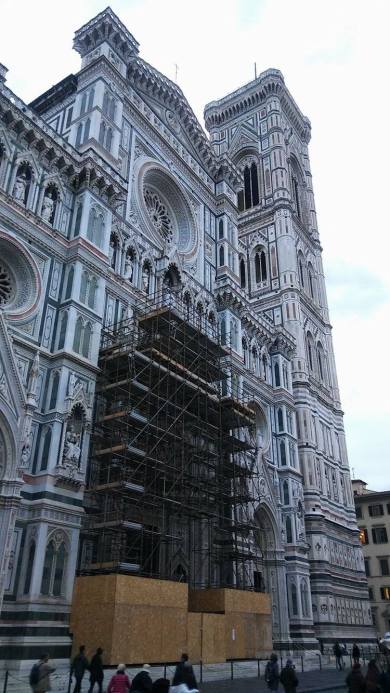 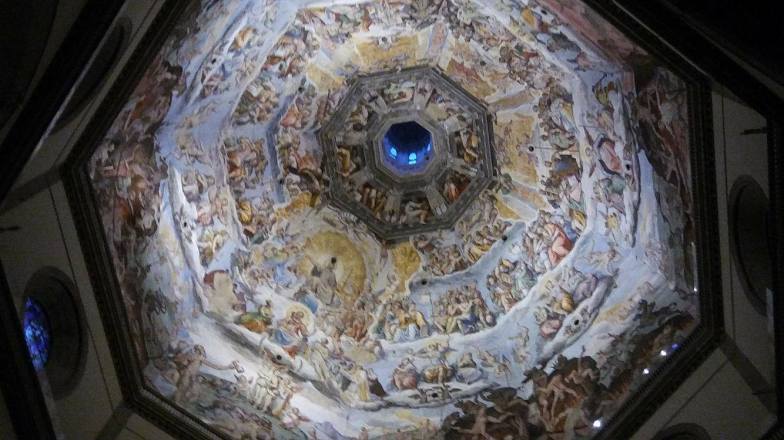 From there I rolled out to Ponte Vecchio, which is the imaginatively named oldest bridge in Florence. 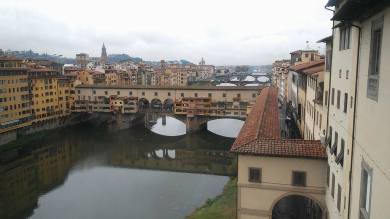 I saw a couple of market squares and haggled a t-shirt down to half price, then ate a steak and made my way back to the hostel. I sequestered in the quietest room I could find, which was, sadly, the dance floor, and wrote my account of Rome and the Vatican until I ran into my chef buddy from earlier.

“I’ve been drinking pretty much since lunch,” he said. “I wound up with a bunch of Americans and Canadians and South Koreans out on the terrace, and we killed 15 bottles of wine. 15.”

Sure. It was happy hour, why not. I met a ton of ’em and forgot every name except the French-Canadian girl who was real insecure about being in her mid-thirties, and I only remember hers because it sounded, to my unsophisticated ear, like “Julie” with a really over-the-top French accent. A tiny Colombian girl taught us all the rudiments of salsa dancing. It turned out, it was someone’s birthday, and he had hobbled up to the bar on the brink of blackout when the Australian girl announced, “WE’RE DOIN’ A SHOEY!”

In the barbarous outback, Australians will arbitrarily drink beer out of shoes, sometimes, for some reason. I looked into it, and it apparently stems from a 20th century custom of drinking champagne out of a lady’s slipper to signify decadence. I don’t know how Australia went from that point A to this point B, but the idea was introduced and the fervor was growing.

A disgusting side note: Everyone here is backpacking. You don’t bring multiple pairs of shoes backpacking because you don’t have the space to spare, so everyone is wearing the one pair of shoes they brought every moment of every day, walking an average of 10 miles a day through these exotic new locales. A hefty South Korean man donated his sneaker to the cause, and, to my unabashed horror, a shoey occurred.

“This is incredible,” the chef told me. “This is the highlight of my night.”

“What the hell’s he gonna do without a shoe?” I asked. The answer, it turned out, would be to spill half a bottle of white wine on the dance floor and grind his socks into it.

I hung in until 1 AM, but I had the Uffizi tomorrow, then a bus back to Rome. I bade all my new friends farewell, thanked them for the glass of wine (a drop in the bucket, really) and retired to my chambers.

I woke up the next morning and paid the $8 for the breakfast buffet. Back at home, I would eat a minimum of 4 eggs a day. Now, it had been two weeks since I had a scrambled egg, and I was suffering. I packed away three cups of coffee, a rasher of bacon, an alarming quantity of mushrooms, two rolls, a couple croissants, and a charcuterie board. The girl by the window kept glancing at me, presumably because of the acre of farmland I was eating, so I struck up a conversation with her that she did not understand at all.

“What’s your language?” I asked.

Despite the fact that she knew maybe 40 words of English, we spent around a half hour gesturing and making faces at each other to convey where we had been and where we were going. She told me she heard Athens was very nice, but she hadn’t gotten to go when she was in Greece. She had been in Crete, and the beaches were beautiful, but that was in the summer so odds are I wouldn’t get the chance to swim. She had only been doing a day or two in each place, and tomorrow she was bound for Rome; I warned her that there’s way too much to do in Rome, and she’d need to stay for at least a few days.

We said bon voyage and I gathered my stuff, checked out, and went to the Uffizi, where I waited in line for a precious hour. There was too much stuff there for me to do a play-by-play with pictures, but here’s the view from the rooftop cafe. 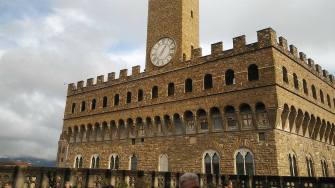 I got out and ate a tripe sandwich, which I would not recommend. It’s the greasiest thing I’ve ever eaten, and although the… tissue… holds spice flavors incredibly well, it still tasted kind of like cows smell. I spent my time waiting for the bus wondering how a stomach can digest another stomach.

Four hours later, I was in Rome, where I crashed at Melting Pot for six hours before returning to the bus station to catch the worst bus in Europe.

Friends, if you take nothing else from my blog, take this: Never, ever use Terravision. They’re not a bus company, they’re war criminals. It was psychological torture. At 4:40 AM, I showed the ticket they forced me to print out at the hostel (that was a whole different debacle; Terravision doesn’t accept tickets on phone or tablet) to catch the bus that was supposed to depart at 4:50 AM. He looked at it and said, “Next bus.”

The next bus, which was supposed to leave at 4:50, arrived at 5 AM. The early morning troglodytes clustered around the door as though, if they lowered their guard, their reserved seats would be given away. I got on the bus and shortly thereafter, a mother with an infant sat in the seat across from me. As is tradition. It was 5 AM, and something like 40 degrees on the bus. It was a matter of time before that child freaked out. The doom in the air was palpable.

The bus eventually went to the airport, but based on his spastic working of the pedals, I don’t think the driver had ever driven anything before. Maybe he was blind, or epileptic, or both. The bus was rattling apart around me. Unbelievably, they turned on the air conditioning.

I fled into the cold, tiny airport, which is where I’m writing this. My flight to Athens is about to start boarding. I’ll be in touch.

spare me but a cup of henny my family is starving
Chicken enchiladas and guac.
Chicken breast with pesto Genovese, basil and tomatoes from the yardfarm, in celebration of Italy's victory. I don't follow soccer, but I love when England embarrasses themselves on the international stage.
Poulet sauté au vinaigre with baked potatoes.
Kung pao chicken. Breaking in the new wok. Let's wok and roll 😎
Penyrli pide. It's like a Turkish pizza boat.
Follow Bastard Travel on WordPress.com