It’s your boy Theseus here, giving you a punctuated play-by-play of Budapest because things are too densely crowded and chaotic to do this chronologically. Today’s bit starts both in the Castle District and in media res.

I went up to the Castle Bazaar, I was under the impression that a “Bazaar” is a sweet flea market, like every bazaar in Turkey was. I’m good on palaces for a minute, but I did need some blank t-shirts so my screenprint souvenir dealies don’t immediately out me as a tourist. I know five words in Hungarian now and that’s more than enough to fake my way through two conversational exchanges. If they see me standing there in a cheap, ill-fitting Athens shirt, they greet me in English. Contemptuously.

As it happens, sometimes a bazaar just means a large, boring courtyard. This was one of those times. Disappointed and chilly, I decided to forage up lunch somewhere in the castle district, and that’s where I discovered the Labirintus.

I’m a sucker for mazes. I’ll be it has something to do with my total lack of a sense of direction, some sort of compensatory reaction formation mechanism, like closet-gay homophobes, or Catholic schoolgirls. Plus, it was a real, live dungeon, underground, where people were imprisoned and tortured.

Budapest is built on an elaborate system of caves. Ten million years ago, most of central Europe was submerged under an enormous body of water called the Pannonian Sea. 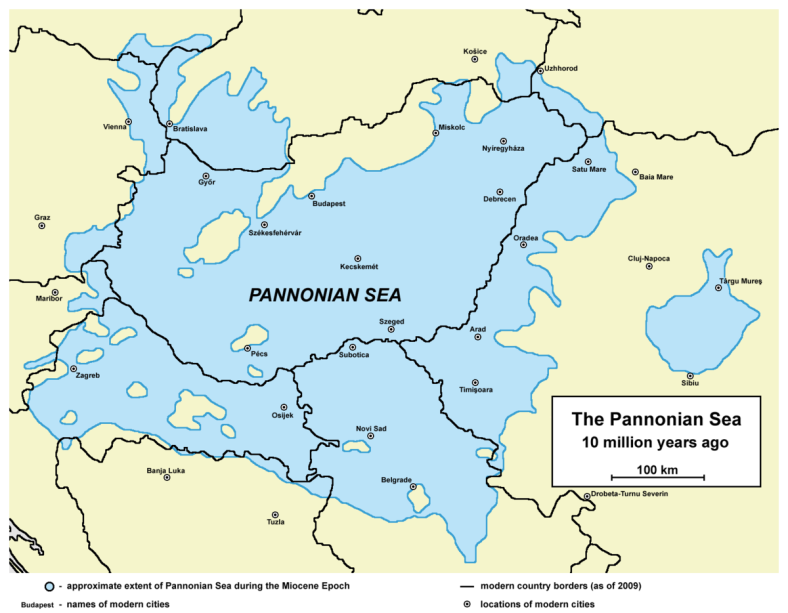 Four million years ago, it had shrunk to Lake Pannon, which still covered the majority of Hungary. As the flora and fauna lived and died in the water and the ecosystem shrank down, the salts and minerals became concentrated.

The capitol of Hungary is also famous for its thermal springs, which were long thought to possess supernatural healing powers because of their own weird mineral concentration. When the Pannonian water soaked through the soil and met with the miracle-water of the geothermal springs, it turned slightly caustic and, over millions of years, carved out a tremendous complex of caves. Tectonic shift drained Lake Pannon and the groundwater below it, and Budapest, being on the fault line demarcated by the Danube, was left with a sprawling natural cave system thought to be more than 62 miles (100km) long.

Terrible place to build a city what with all the sinkholes, but what are you gonna do.

Throughout its entire history, Budapest used the caves for strategic superiority. Buda proper was built around 1250 when King Béla IV of Hungary got tired of being sacked by Mongol raiders, so he moved his kingdom 200 meters away, to the top of a hill, and built a wall around it. Walls, being the only Mongolian weakness, effectively deterred them, and medieval Buda thrived.

From that point forward, whenever Buda was threatened by siege, the soldiers (and in the case of Fisherman’s Bastion, also the fishermen) would man the walls and the rest of the population would shuffle into the caves like mole people. The strategy worked so well that Budapest used it to survive the Soviet bombings of World War II.

The Labyrinth was divvied up into four sections. The first was a wax museum based on an opera that was, in turn, based on some drama that took place in Buda Castle. The second was the eponymous Maze of Darkness. The third was the cell where King Mathias kept Vlad the Impaler imprisoned for 14 years as punishment for eloping with his adolescent daughter. The fourth was, inexplicably, a bunch of posters describing other caves in the world. 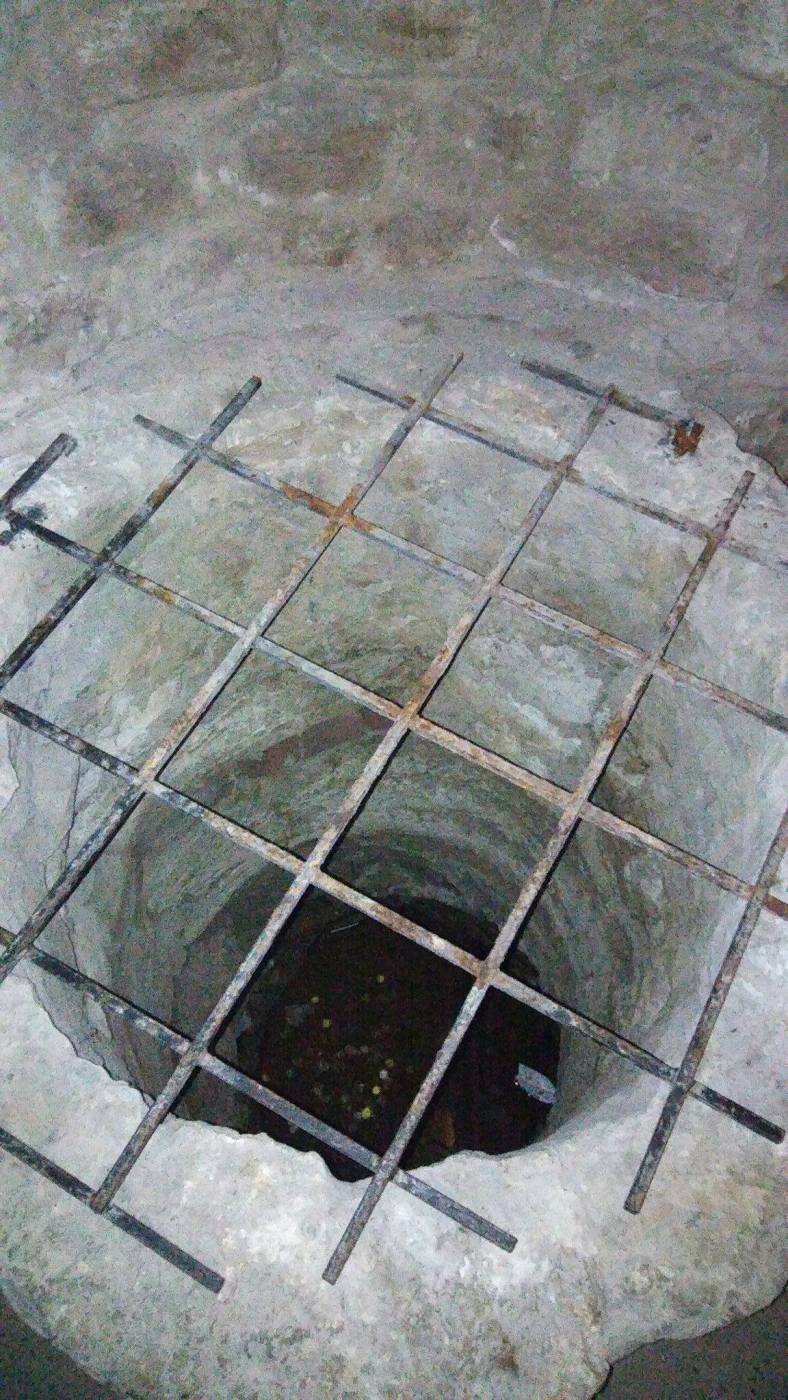 I did the Maze of Darkness first. You don’t really appreciate how dark it can get. All the darkness we experience in civilized society is disrupted by street lamps, refracted glare, cell phones, moon and starlight. Even when we close our eyes we have something that resembles darkness, but it’s not real, true, black-as-pitch darkness. 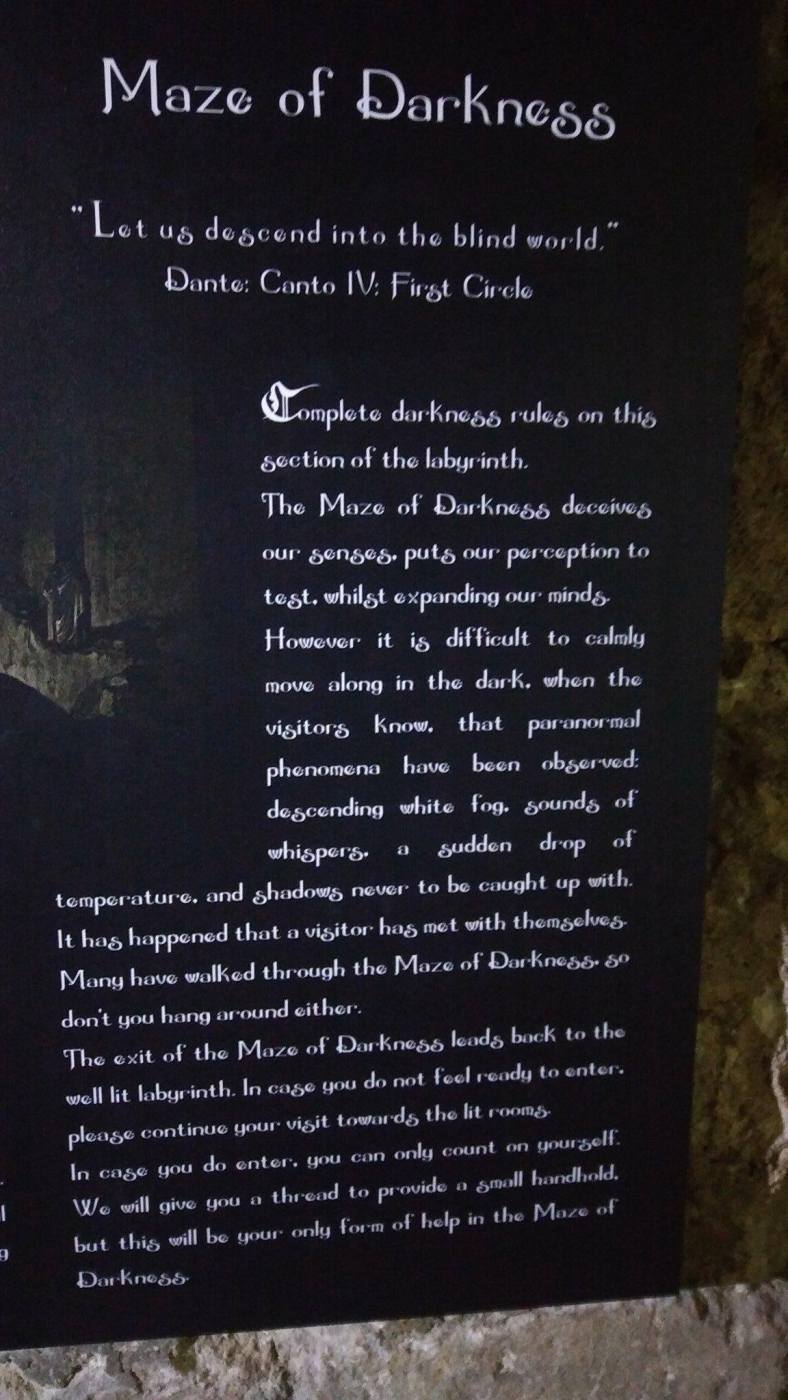 The Maze was deep enough under ground that there was nothing. They left a rope running along a wall to guide you through, but that was it. Without it, it’s so dark you’re not sure if your eyes are open.

I’m a big dude. I don’t rattle. But when you’re in that kind of dark, it makes you realize that if there’s anything down there that can see even a little bit better than you, it’s over. You don’t have a chance. A chihuahua with light-amp goggles could have ended my life.

Obviously, it was too dark in the Maze of Darkness to see the realized nightmare at the end, so I took a picture with flash before strategically retreating into the Straightaway of Electric Light. 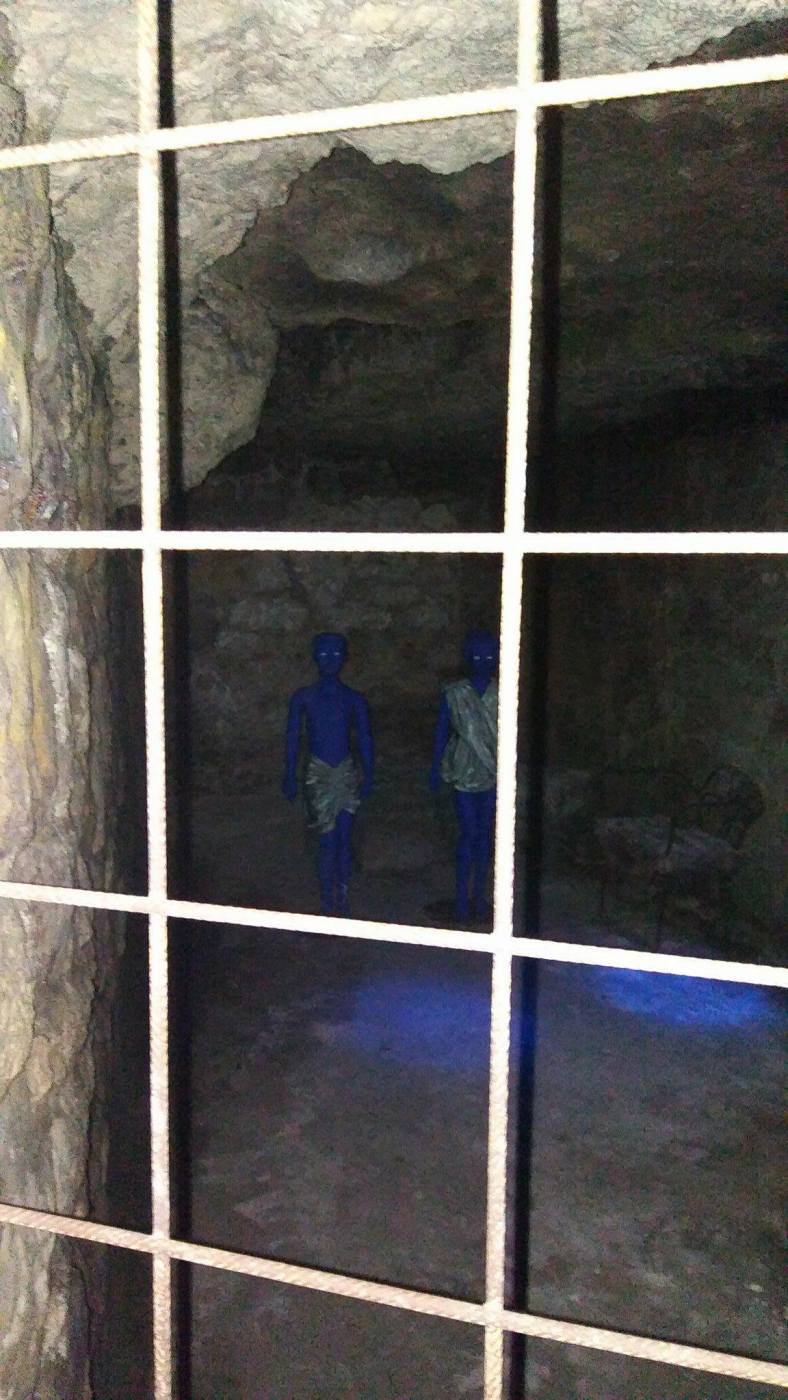 After I stopped crying, I looped around into the fog where they kept Dracula.

In getting to Dracula, I scared the shit out of everyone by accident. Nobody else seemed to want to wander around a foggy, haunted dungeon alone, for some reason, so when I’d pass couples or clusters of girls in the corridors, there was nothing I could do to warn them. I’d lumber out of the mist and they would freeze or, in some cases, actually scream, and I’d just smile indulgently and keep on goin’. Not a lot to be said at that point.

I checked out the cave exhibit but it was really sad. With Dracula at large and those horrible blue children still lurking around somewhere, I bade the labyrinth farewell, got lost three times, then found my way to the exit where I overheard a British couple discussing reading of signs.

“There, see?” the dude said. “No photography allowed. Nearly missed that one, that’s important.”

So don’t tell nobody.

I emerged into the frozen Budapesti day and went to find food that would, hopefully, not be sausage.

ah yes. comfort achieved
Unforeseen thiccness? 💎🙌? Both?
Darling, you look wonderful tonight
Come on man
I took away his pig femur. It hurt to see the betrayal rattling around in that huge, fortified head, but he was crunching through it like it was a waffle cone and leaving these knitting-needle bone spikes all over the living room. It would hurt worse if my favorite little guy stabbed himself in the craw.
Demon-crats GIT OUT!!!!!!
Follow Bastard Travel on WordPress.com