You want horror? I’ll give you horror.

Do not mistake me. Pennsylvania is incredibly brown and rusty. I’ve lived in this coal crater my entire life, and I didn’t learn about the color “green” until I was a man (which, in the Frozen North, occurs when you bite your first coyote to death, around age 7 or 8). But if you ever enter New Jersey at night – god forbid – you’ll see everything has a faint yellow cast to it. I privately think of it as “piss smog”, though I don’t share that with anyone unfortunate enough to be in the car with me when caught in New Jersey’s event horizon.

In the Art of War, Sun Tzu delineates nine types of ground you’ll happen upon in battle and the strategic applications of each. The final, and most severe, is “desperate or deadly ground”, where no tactics can save you. You burn your possessions, you tell your troops to abandon all hope, you put your backs to the wall, and you fight. As interpreted by the enormous herbalist and military advisor Li Ching:

“The country is wild, destitute of water and plants; the army is lacking in the necessaries of life, the horses are jaded and the men worn-out, all the resources of strength and skill unavailing, the pass so narrow that a single man defending it can check the onset of ten thousand; all means of offense in the hands of the enemy, all points of vantage already forfeited by ourselves:—in this terrible plight, even though we had the most valiant soldiers and the keenest of weapons, how could they be employed with the slightest effect?”

Obviously, this isn’t going to be a chronicle of tourism. I was in New Jersey once by choice, five years ago. It was because of a redhead, as are all of my lasting life mistakes. I went to the Jersey Shore, not yet realizing that beaches are a waste of time, and I did what I could to ignore the fact it was basically a salty, wet landfill. Here are a couple of action shots featuring my chunky yet funky youthful incarnation making the best of it. 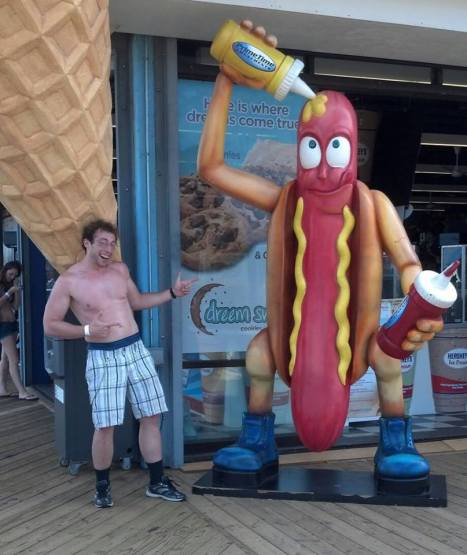 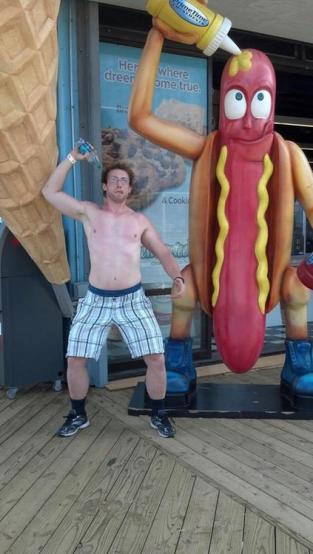 This was shortly after a carnie solicited that I “throw a free dart at the balloons!” I did, and popped two.

I decided I didn’t need a bootleg stuffed Garfield that bad and started on my way. The dude came roaring around the side of his booth, flailing his arms like an early Jim Carey and j’accuseing me of “NOT EVEN CARING ABOUT THE SHORE!”

“Correct,” I assured him. He seemed to get more upset, even despite my validation.

I did get a fetal shark there, though. His name is Formaldehoward and he has been the best roommate a dude could ask for. 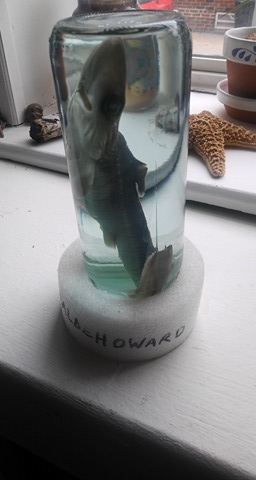 he’s gotten wrinklier, but who among us hasn’t?

When I escaped Jersey, I solemnly vowed to never return. I was doing well for half a decade.

I’m newly transplanted to Philadelphia, where I’ve burrowed into a seaside cave to ride out the coldest parts of the winter. Never fear, beautiful readers, I’ll run up the Rocky steps, look at statues of Benny Frank’s fat ass, and lambast the local beer as soon as I can go outside without the mucous membranes around my eyes freezing solid. If it were up to me, I’d hunker down and hibernate until I could bang through a long run without my sweat turning to shards of frost before fully escaping my pores. It’s like being stabbed by hundreds of tiny icicles.

It takes a while to cross the Ben Franklin Bridge, but you can tell when you hit New Jersey because this potent ennui settles around you like a dark cloud of piss smog. Your phone will also chime, and Google Maps will tell you, “You’ve just entered New Jersey. Jeez.” and then autosuggest Suicide Hotline numbers.

The third surefire way to tell whether you’ve crossed the border is how the people around you are driving.

Are they driving like stupid assholes? Odds are good that you’re still in Philly.

Are they driving like stupid assholes who have a personal vendetta against you, and  their genitals are being mauled by wolverines, and also everyone involved is rabid, and on fire? Got some bad news for you, my friend.

After narrowly surviving some merges that would qualify as American tragedies if they’d happened in a NASCAR arena, we pulled into Bed, Bath, and Beyond in search of, apparently, a multitude of wooden cutting boards, each about an inch bigger than the last.

i’ve got about a dozen punchlines for this one, but they’re beneath us both

If you want a pictorial summary of the Jerseygrant, it’s right here. Don’t look at it too long or you might think about it.

We narrowly escaped with our lives (and a George Foreman Lean Mean Grillin’ Machine, which was my prime motivation for braving this outdoor dungeon). On the way back, I stopped for gas and discovered most of the t-shirts advertised Philadelphia. At the time, I wrote it off with “Well, I could understand why”.

Then, back across the Ben Franklin Bridge. Entering New Jersey is free. There are signs all over the bridge that say, “NO TOLL THIS WAY”.

It was a eureka moment for me, the slow-dawning realization that the only reason this enormous seaside diaper-pile can afford what it so courageously calls its infrastructure is by tithing the dumb suckers from Philly, out to visit the only nearby beach.

I slammed my mouth full of the worst chocolate covered peanuts I’ve ever had (how do you even fuck those up?) and vowed, once again, to never return to these blighted hatelands.

But I didn’t leave empty-handed.

Contrary to what deceitful boxes may tell you, the George Foreman Lean Mean Fat-Grillin’ Machine does not, in fact, remove 42% of the fat. It’s closer to 0% of the fat. It’s just a sloped panini press. If losing the juices from a burger removed the fat, wouldn’t every burger cooked on an open-grate grill be fat free?

However, it DOES cook hamburgers indoors in the dead of winter, providing me valuable iron so I’m not constantly covered in bruises trying to navigate my giant, stupid body through the trappings of civilization. One could say this trip was my paying the iron price, and one wouldn’t be wrong.

But what a price it was.

spare me but a cup of henny my family is starving
Chicken enchiladas and guac.
Chicken breast with pesto Genovese, basil and tomatoes from the yardfarm, in celebration of Italy's victory. I don't follow soccer, but I love when England embarrasses themselves on the international stage.
Poulet sauté au vinaigre with baked potatoes.
Kung pao chicken. Breaking in the new wok. Let's wok and roll 😎
Penyrli pide. It's like a Turkish pizza boat.
Follow Bastard Travel on WordPress.com