I’d spent too much time in the Delph and my skin was starting to itch. I’d already booked three or four flights for the summer and had a slew of weird adventures lined up, like a beer festival in Denver that I will be attending on a cocktail of whatever further psychoactive substances they legalize in the interim (don’t tell the Girl, it’ll be a fun surprise), another Left Coast voyage for a wook music festival I’m promised will be in some way shamanic, and a presumably more civilized jaunt to Iceland. Stay tuned.

But that’s then, and for right now I’m breaking my back every goddamn day, somehow using my useless degree to accrue a vast fortune destined to be converted to unmarked bills for my inevitable disappearance into Latin America.

The Girl and I loaded up the car and went to Providence, Rhode Island.

The trip was a straight shot up the highway where I wasn’t forced to kill anyone. I’ve tamed most of my frustrated adolescent rage and sublimate it into useful things, such as writing, hitting a tractor tire with a sledgehammer, and a +2 bonus to both attack and damage rolls. The only place my incandescent, white hot fury persists is road rage, and I frequently inform strangers who don’t signal when merging that I will “peel off your fucking skin and eat your insides like an avocado” while my passengers look on in mortified alarm. This was worse when I drove for Uber.

We dumped our gear at the Motel 6. We booked it exclusively for the cardboard cutout of Tormund Thunderballs in a tuxedo, which is the only amenity I consider relevant in a lodging. Unfortunately, that’s at the Super 8. Not Motel 6. Same number of letters, same division and placement of vowels and consonants, same numerical character at the end, but one has Tormund and the other has fifty stoned Indian dudes sitting in the hallway that leads to your room.

We got there around 10pm and, plumb tuckered from the drive, we fell into a merciful unconsciousness.

According to an algorithm advertisement for something called “WaterFire”, which is almost my favorite post-punk band, the move is dropping your car at “providence mall”. It was the first common noun location I’d seen on Google Maps on this side of the Atlantic.

Farbeit for me to challenge the oracle, this was the move we made.

The parking garage exits were not clearly marked, and the first door we tried set off an alarm. We pretended this was normal or appropriate, and then found ourselves in the Silent Hill bowels of the mall, trepidation mounting as we navigated the labyrinth of the flaking plaster, bare yellow hanging bulbs, and inexplicable metal painter’s scaffolding that materialized around every corner and stretched, foreboding and monolithic, to the thirty foot ceilings. We’d noclipped out of reality in the city that built Lovecraft, and I already didn’t like our chances.

Every door we found was locked, and we had gone too far into the Backrooms to follow our breadcrumbs back to the parking garage, even if I wasn’t born with crippling directional insanity. The alarm wailed in the distance, growing louder and softer at complete random, like the physical manifestation of anxiety.

Desparation was setting in when we turned another identical corner and found three iron push-bar doors. Some demon had forgotten to lock the middle one.

We emerged under a bridge near the Providence Waterfront. 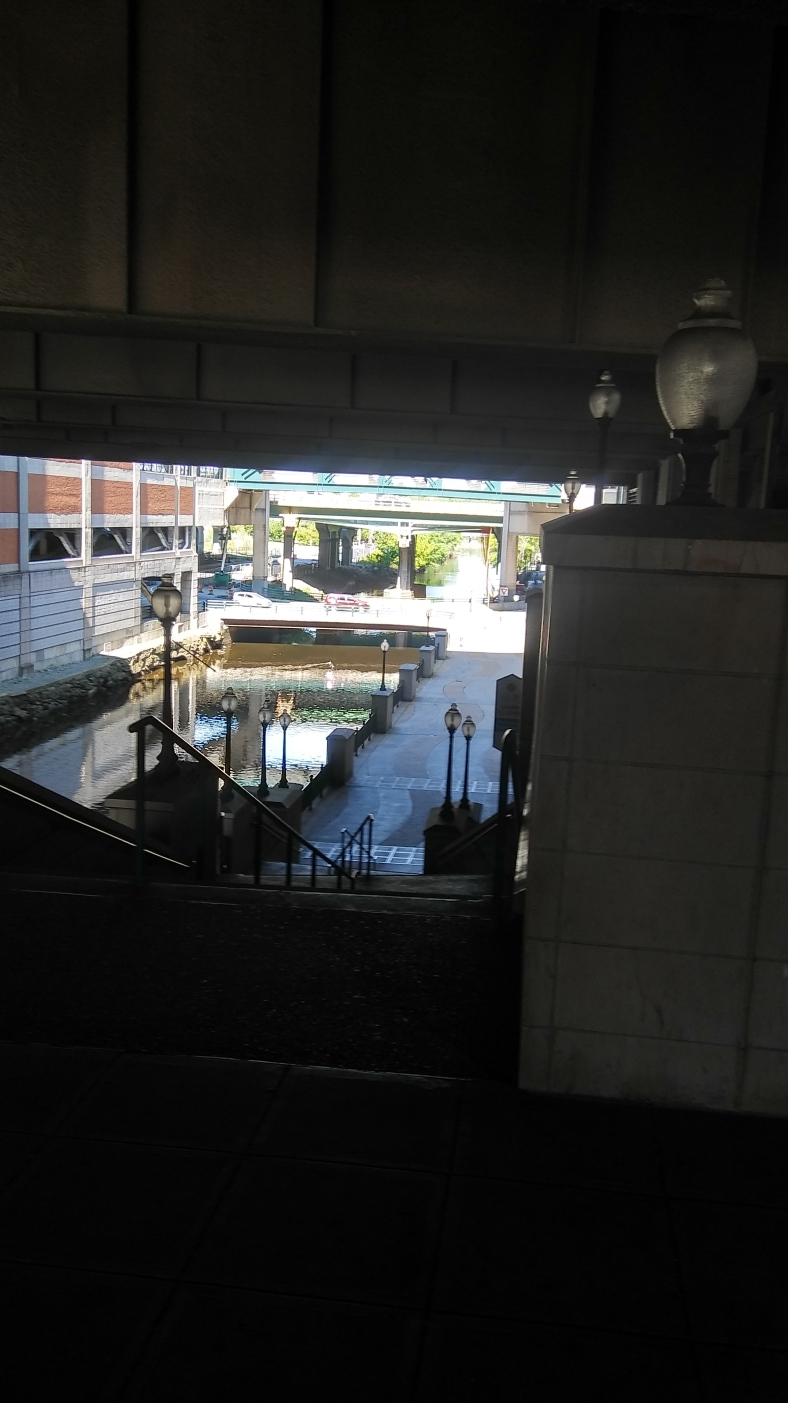 Our first stop was some sort of Veganarium that sold exotic egg sandwiches covered in dandelions. They had no cups for the mustard or hot sauce, so I was forced to use coffee cup lids as shallow condiment receptacles. This worked surprisingly well, but I am an idiot, and the liquid tabasco rolled through the tiny vent and got all over my shorts.

First meal. First meal of the day! I’d been awake for like an hour!

This tiny egg and quinoa-grain bread or whatever provided me the power to cross town for elevensies at Providence’s most highly recommended mom-and-pop restaurant, which is called “Kitchen”. That’s the whole name.

Kitchen had five tables total and a line of hipsters out the door and halfway down the block. We wound up waiting for around forty-five minutes, which sounds much worse than it was, as Girl and I wound up befriending a troupe of theater kids from the local art school. I butted into their conversation when they couldn’t think of the thing that’s “like a dragon but with just two legs and wings” (wyvern), and they proceeded to provide us with many thoughtful recommendations for things to eat and do around downtown, all of which we promptly ignored.

When our time finally came, I found I could not fit into the booth.

Kitchen is a little farm-to-table dealie that provides an excellent experience with  standard breakfast fare. I housed my own eggs, sausage, and bacon, then ate most of Girl’s eggs, which may be a contributing factor as to why I don’t fit in some chairs. I declined her leftover biscuits, however, as I deny the Demon Wheat.

"You see that handsome mammoth who couldn't cram his stupid skeleton into the booth?" #kitchen #providence

We bade goodbye and good luck to the theater kids who were, unbelievably, still waiting in line. The one whose actual name was Gunner said, “We’ve been waiting for two hours now. It’s too late to bail.”

We homed in on our first destination: the Gun Totem.

The Gun Totem. A 3500 lb obelisk of concrete and 1000 reclaimed handguns. The question is, why? #providence #guntotem

When reading about this on Atlas Obscura, I assumed an obelisk made of a thousand guns would be really imposing and perhaps suggestive of the fact that we live in a society.

I don’t know if I’d call it anticlimactic, it delivered as advertised. I think Yurp just spoiled obelisks on me. They really mean it out there.

We sat on the river bank and watched a battalion of little goblin tourists try to frighten away the ducks with limited success. This gave me a mighty thirst, and we wound up at the best bar in Providence, a little street corner affair called the Malted Barley. The beer was cheap, the portions generous, and the waitress an angel given material form by the name of “Courtney”. I have not encountered a Courtney in the wild since 2006, and I assumed they went extinct.

Courtney pumped us full of beer and shared with us sacred, secret Providensi lore. I asked her about WaterFire, and her already somewhat disproportionately oversized eyes widened still further in alarm.

“Is that tonight?” she asked.

“I don’t know,” I said. “Google said to park at the mall. That’s the extent of my knowledge. What is it?”

“Oh,” she said, then, “Oh! WaterFire is this big downtown event where they float burning wood on the river, and that’s the event.”

She paused, then said, “It’s a lot better than it sounds.”

She kept bringing us larger and stronger beers, and soon I was very much daydrunk and doing all in my power not to shout like a crazed animal and alarm the gentle Providencians.

It must be said, the people of Providence are very friendly and surprisingly willing to engage. Courtney theorized this was due to the nice weather. We informed her that we were Philly natives, and it is advisable to avoid interacting with strangers in Philly, as many of them smoke a lot of crack and want you to give them money for absolutely no reason.

“There’s still some of that here,” Courtney said. “But it sounds like… less.”

This has been a lot of words, and this seems like a natural narrative break. More to come soon.

I know the feeling
Caw
the risotto
Castle I was not allowed to see because of the police state
this dude was losing his mind
Beefton do not leap into the quarry
Follow Bastard Travel on WordPress.com